It's Halloween, and Halloween means many things: candy, trashy costumes, a new The Simpsons Treehouse of Horror episode, and Poe readings throughout high school English classes everywhere. Since only one of those is a writer, I will delve into the last for today's post. More specifically, we'll look at what Poe had to say about writing.

A while ago Gotham Writer’s Workshop featured Poe and mockingly claimed that “in a recently-found treatise, he set down the following advice for bettering a story: *
1.     Employ an unreliable narrator, preferably one who doesn’t know he is insane and has no recollection of such events as digging into a grave to rip out the teeth of his recently departed lover.
2.     Include a beautiful woman with raven locks and porcelain skin, preferably quite young, and let her die tragically of some unknown ailment.
3.     Use grandiloquent words, such as heretofore, forthwith, and nevermore. A little Latin will also enhance the text.
4.     Do not shy away from such grotesqueries as inebriation, imprisonment, insanity, and men costumed as orangutans being burned to death.
5.     When in doubt, bury someone alive.
* Poe didn’t really compose this advice, but, as he was fond of a good hoax, we hope he would be pleased by this affectionate charade. “ 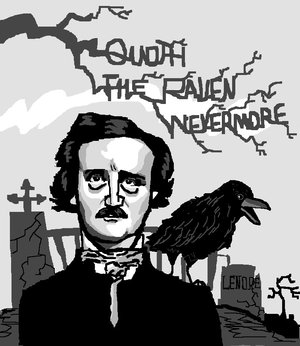 Funny. But Edgar Allan Poe is so much more than that, and writers who want to build tension or get a little dark should be posing the question…what can budding writers learn from Poe about the creepy?  Here are some of my favorite takeaways from my Googling research:


1.       Poe on punctuation: “It does not seem to be known that, even where the sense is perfectly clear, a sentence may be deprived of half its force--its spirit--its point--by improper punctuation.” He then goes on to defend  the use of the dash by saying “The dash gives the reader a choice between two, or among three or more expressions, one of which may be more forcible than another, but all of which help out the idea. It stands, in general, for these words—‘or, to make my meaning more distinct.’ This force it has--and this force no other point can have; since all other points have well-understood uses quite different from this. Therefore, the dash cannot be dispensed with.”


2.       Poe believed that man should write backwards. “Godwin wrote his Caleb Williams backwards? He first involved his hero in a web of difficulties, forming the second volume, and then, for the first, cast about him for some mode of accounting for what had been done.”
3.       I’m not the only one with this idea. Last year one writer prepared for NaNoWriMo by reading Poe’s Philosophy on Composition and condensed it for the rest of us.
What do you think is Poe's genius? Has he inspired your writing in any way?
Posted by Lauren Monahan at 8:48 AM