Today I'm excited to welcome author Melinda Friesen, who's here to chat writing and her latest release SUBVERSION. Make sure you scroll to the bottom of the post for a chance to win your own copy of Subversion, and check out it's predecessor Enslavement if you haven't already!

Thanks so much for coming to Thinking to Inking! We're so excited to have you here! Tell us a little bit about Subversion.

Subversion the sequel to Enslavement and book two in the One Bright Future series picks up a few months after the end of Enslavement when Rielle James, protagonist extraordinaire, is hell bent on rescuing her friends. She refuses to live free while her friends are still enslaved. She devises a plan to save one of them who has been sold to a logging camp in northern Montana where slaves are disappearing without a trace.

Who's your favorite character from Subversion?

I dearly love Rielle and Nathan, my two main characters, but I introduced a new character in Subversion named Dek. Dek is a rugged, crusty, crotchety old man. He’s got a hot temper and smokes a couple packs per day. Despite his tough and cranky exterior, he’s got tons of heart. He sprang to life in my head, fully formed from his nicotine-yellowed fingers to his dirty work pants to the way his truck floor is a dumping ground for jackets and plastic coffee mugs.

How did your writing process for Subversion differ from Enslavement, the first book in the One Bright Future series?

I wrote the entire series in nine months. The writing part wasn’t much different from book to book, however, I revised, edited, and rewrote huge portions of Enslavement, so those changes had to be reflected in Subversion. Bringing Subversion into line with Enslavement was a huge task. A book that had taken me a couple of months to write, took me nearly a year to edit.

The covers for both books in the One Bright Future Series are amazing! How much input did you get in the design of your cover and what was that process like?

I really love my covers too. I did get some input, mainly in the sense of the publisher showing me the cover and me giving it the go ahead. At first, I wasn’t sure about the bar code idea because the book uses microchips, not bar codes, but eventually it grew on me because it symbolized my protagonist as a product. In terms of conveying the subject and tone of the books, the designer nailed both covers.

Work at improving your writing. Never allow yourself to stagnate. Learn everything you can about writing and publishing. Get some writer friends for moral support and good advice. And keep going!

Write book two, but don’t spend a ton of time revising it. You will make changes to book one in the editing process which will translate into changes to book two. The series may deviate from your original direction as you go, so it’s best to hold subsequent books loosely and be open to going in a different direction.

I’m currently reading Red Queen by Victoria Aveyard and Blood of the Dead by A.P. Fuchs.

If you could be one character from any book or movie, who would it be?

I had a hard time of this question, but I finally narrowed it down to Elizabeth Swan from Pirates of the Caribbean. She had an amazing adventure. Or maybe it was the drinking rum with Johnny Depp on a beach in the Caribbean that intrigued me.

Congrats on the launch of the second book in the One Bright Future series, and thanks so much for stopping by!

Thank you so much for having me! 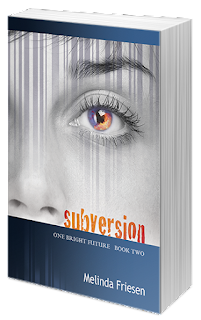 “I surrender my days, my efforts, myself to the OneEarth Bank . . .”

After fleeing slavery, Rielle James burns with the desire to topple OneEarth Bank and end its enslavement of young people as Contracts. When she learns that her friend Nathan has been sold to a logging company where Contracts die or vanish without a trace, she assumes a false identity and becomes a slave again to help him escape.

Her act of subversion uncovers the horrific truth behind the OneEarth Bank’s role in Contract disappearances and its link to a global pandemic.

Can Rielle and Nathan escape and expose the truth before it’s too late? 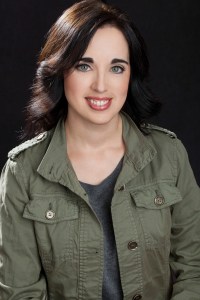 
Melinda Friesen writes novels for teens and short stories. Her contest winning short stories have appeared in various periodical and an anthology. Enslavement, book one in the One Bright Future series, is her first novel.
Website | Twitter | Facebook | Goodreads | Pinterest