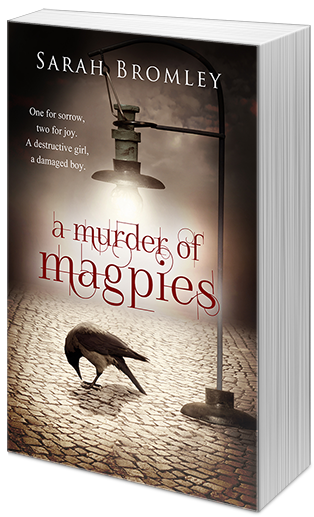 Happy belated Halloween, everyone! What better way to celebrate Halloween than by sharing an exciting new release with a murderous theme? I'm excited to introduce you all to Sarah Bromley's debut novel A MURDER OF MAGPIES. I had the opportunity to ask Sarah a few questions about her writing process, her debut, and her words of wisdom for those of us still in the trenches. Hope you enjoy the interview, and don't forget to scroll to the bottom for a chance to win a copy!

How long did it take you to write A MURDER OF MAGPIES from start to finish?

It was roughly five or six months from start to finish, but I’ve revised it a number of times over the years to make it the story I always wanted it to be.

What was the inspiration for your story?

I have Romani on my mother’s side of the family, so certainly some of the superstitions I grew up with were part of the inspiration, and I’m fascinated by psychic abilities. All the women in my family have a kind of weird intuition about things and are very empathic, we tend to be able to feel things and know things we shouldn’t. It’s very odd, and that certainly played into developing Vayda and Jonah’s Mind Games.

It’s hard to pinpoint because there’s no one who looks exactly like what’s in my head, and what’s in my head won’t be what’s in a reader’s head. But when I have to pick, Ariel Winter from “Modern Family” is very Vayda-like and Landon Liboiron from “Hemlock Grove” is close to what I had in my mind for Ward.

I have two places: one is the screened-in porch behind my house where I can be outside, shaded, and stare at the woods, and the other is the antique desk I’ve rehabbed in my office. It’s covered with oddities like Victorian spectacles and poison bottles. I share my office with my daughter’s guinea pig, Annabel Lee, and there’s almost always one of my three dogs with me.

The cover is fantastic. How much input did you get to put into the design? And tell the truth - how many times a day do you stare at it? ;-)

Thank you! I love the cover and stare at it way more than I should! Early on, I was able to give input in some of the key themes of the book, and the designer came up with something that captures the overall atmosphere in the story. I ultimately picked the font from the ones we were kicking around. It’s rare to have some input, and I’d actually been an art student in college during my first semester, so I was thrilled.

Do you have any trunked manuscripts? If so, how did you know it was time to move on?

Oh, Lord, yes. I put aside projects when I think I’ve learned what I was supposed to from them. Sometimes a story just doesn’t work. Sometimes it’s not the right time or market. Sometimes you don’t have the skill yet to tackle such a big idea … and the awesome thing about writing is that you can keep working at it and improving, maybe even come back to a project. I’m a very gut-based writer, so if it doesn’t “feel” right or the rhythm is somehow off, I can sense it.

I see you're represented by Miriam Kriss of the Irene Goodman Literary Agency. How long did you query, and how did you know she was "the one?"

I queried one book for roughly nine months before setting it aside after a disastrous revise and resubmit that I felt hurt the book’s integrity. Then I wrote a new book and queried it for about three months before my agent requested the full manuscript. Eleven days later, she emailed me to offer representation. It’s been four years, and I can’t imagine trusting my word gremlins to anyone else. Miriam is incredibly savvy, and she’s her authors’ biggest advocate. There’s such a level of trust and respect that needs to be present in an agent-author relationship, and we just clicked better than I did with any of the other agents.

You must have persistence and faith that your work is good and keep trying for it. Be open to criticism but incorporate only changes that truly resonate with you.

What did you learn from the publication process that surprised you?
How important it is to have author friends who have gone through this already because they are a steadying source of calm when you feel nervous. And you will be nervous. And elated. And grateful for the chance to have a dream made reality.

Thank you for having me!


ABOUT A MURDER OF MAGPIES
SCROLL DOWN FOR A CHANCE TO WIN A COPY!
Title: A Murder of Magpies
Publication date: October 28, 2014
Publisher: Month9Books, LLC.
Author: Sarah Bromley

Winter in Black Orchard, Wisconsin, is long and dark, and sixteen-year-old Vayda Silver prays the snow will keep the truth and secrecy of the last two years buried. Hiding from the past with her father and twin brother, Vayda knows the rules: never return to the town of her mother’s murder, and never work a Mind Game where someone might see.

No one can know the toll emotions take on Vayda, how emotion becomes energy in her hands, or how she can’t control the destruction she causes. But it’s not long before her powers can no longer be contained. The truth is dangerously close to being exposed, placing Vayda and her family at risk.

Until someone quiets the chaos inside her.

Unwanted. That’s all Ward Ravenscroft has ever been. To cope, he numbs the pain of rejection by denying himself emotions of any kind. Yet Vayda stirs something in him. He can’t explain the hold she has on him–inspiring him with both hope and fear. He claims not to scare easily, except he doesn’t know what her powers can do. Yet.

Just as Vadya and Ward draw closer, she finds the past isn’t so easily buried. And when it follows the Silvers to Black Orchard, it has murder in mind.

Sarah Bromley lives near St. Louis with her husband, three children, and two dogs. She likes the quiet hours of morning when she can drink coffee in peace, stare into the woods behind her house, and wonder what monsters live there. When she’s not writing or wrangling small children, she can be found volunteering at a stable for disabled riders.
Website | Twitter | Facebook | Goodreads

Link to raffle copter here
Posted by SStokes at 12:00 AM